Rocky River Ranch has been committed to inspiring independence in girls and young women since 1953.

Our mission is to create an engaging environment where girls can discover their strengths, learn leadership skills and try something new every day while making life-long friendships. 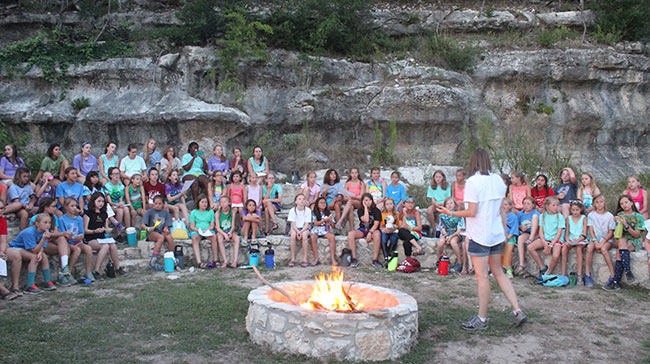 The ranch's brand, the Triple R, stands for respect for self, respect for others and respect for nature. With these virtues in mind, our leadership program encourages girls to be strong and to become strong women. To foster this strength, we've built a creative, challenging and nurturing place, where each child is encouraged and celebrated.

It's more than just a summer camp with cabins, horses and cedar trees. Rocky River is known for its spirit. Campers today sing the same songs, chant the same cheers, tell the same campfire stories and laugh at the same punch lines as campers did 60 years ago. Traditions like the half-a-century-long rivalry between our camp teams (Cowpokes and Wranglers), watching a movie under the stars at the open-air Corral Theatre, the nutty Miss RRR Contest — all of these create an experience your daughter will always treasure.

Tradition gives kids a sense of belonging to a family, bound together by something very strong and magical. That bond — together with friendships and warm memories — is what our girls take home from camp and keep with them all the days of their lives. And that bond? That's Rocky River Ranch.

The perfect summer is waiting for your daughter aged 5 to 14 at Rocky River— filled to the brim with new friendships, challenging activities and, most importantly, lots of fun! Check out our day camp and resident camp options.

In the hot summer months, we’re an all-girls camp, but the rest of the year, we offer year ‘round fun at our Great Escapes for women and Mother-Daughter weekends!

Rocky River Ranch is the perfect solution for your special event! We host family reunions, church retreats, teacher work days, company picnics, Girl Scout groups, and more with lodging for up to 150 guests.

Registration for all programs opens on October 15th at 9:00 am, CST

I have said for years that RRR made me the person that I am today. Actually it wasn’t just RRR, but also the counselors that shaped my experiences and helped me be the best I could be. I learned to problem solve, lead others and to be a leader others wanted to follow. I learned to do my part and that I can do anything I decided to do. I learned to say 'I can' a lot more than 'I cannot.' I learned to co-exist with others which helps me to this day. As a young girl I learned what others around me now in their 30s still do not know. I learned to take care of and respect myself, respect others and the world around me.

RRR is not just two months of SCREAMING prepubescent girls singing songs in the Grubstake, Free Swim at the river or raids on other cabins, it becomes a way of life that helps guide you through the rest of your life. Not unlike the Marines who are brothers for life, those of us who were campers and counselors are sisters for life and will do anything to help each other, no questions asked!

I would not be the person I have become today if it were not for Skeet and Sandy. One of the biggest lessons I ever learned in life was from Sandy — I fell off a horse and Sandy made me get right back on. I had no idea what impact that lesson would mean to my life, but I have to say it has become one of the most valuable.

My summers at RRR were the most special times of my childhood. I have so many great memories that I'll never forget. Thanks to Rocky River, I found my true calling in life … teaching children! And, I fell in love with Wimberley so much, that I live here now!

I will forever remember Rocky River Ranch as the greatest place on earth! To this day I still remember the nine summers that I spent at Rocky River Ranch. I hope to have my children experience camp as I did so many years ago.

I loved RRR from the second I saw it. The smell of the cedar trees sure was heaven compared to the pollution of Dallas. I only got to stay for two weeks that first summer, which was way too short a time. I rode the horses, shot up targets, and made stuff in the crafts hut. I know I made it down to the river a few times. It was the year that I got my red tie in the horseback department and I was sooooo proud! I got to stand in front of the campfire while the campers all went berserk over my accomplishment. I feel so lucky to have the memories that I do and those are of RRR. I don't remember much about my childhood, but I remember everything about RRR and how much I loved going there every summer. It was heaven on earth.